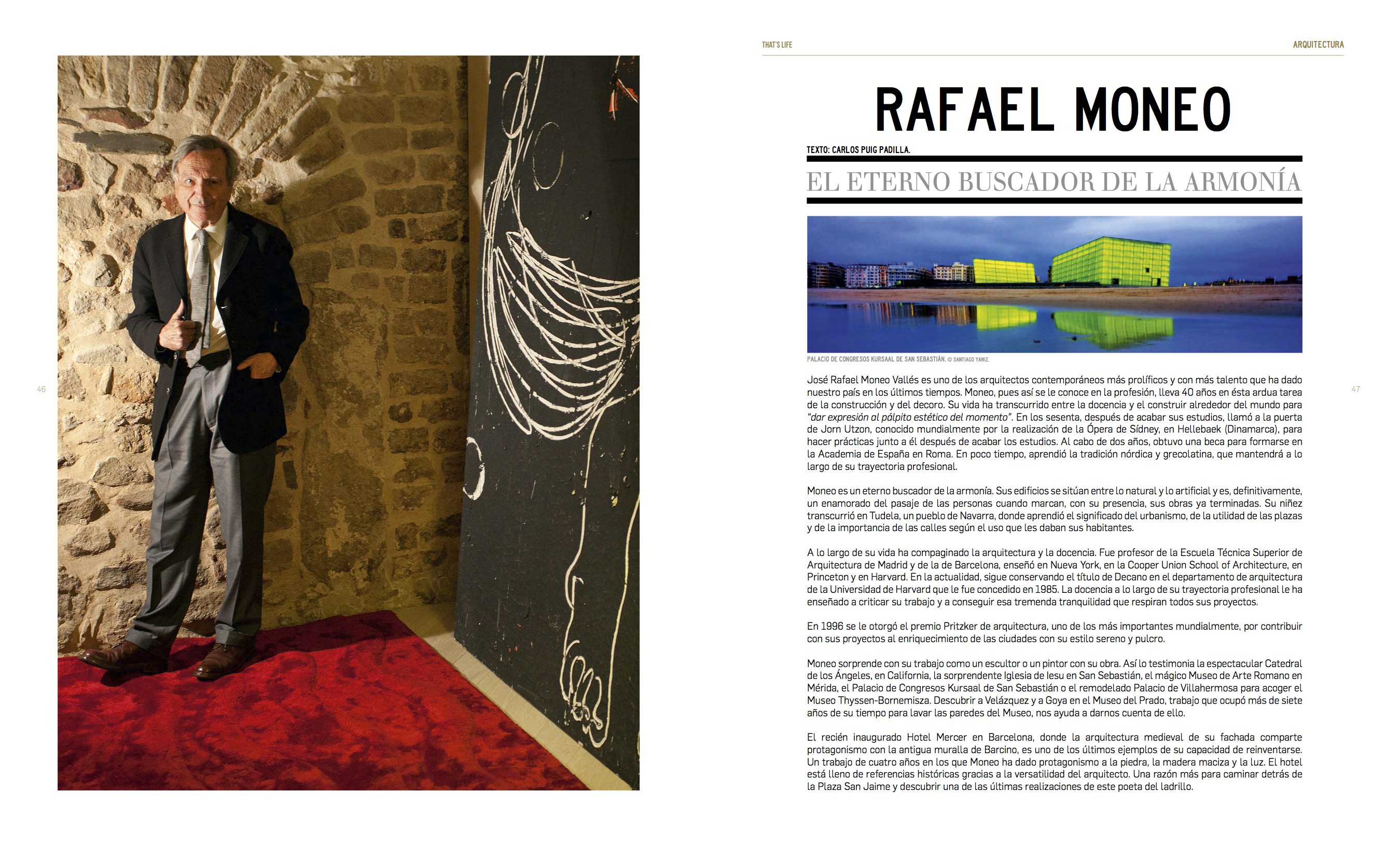 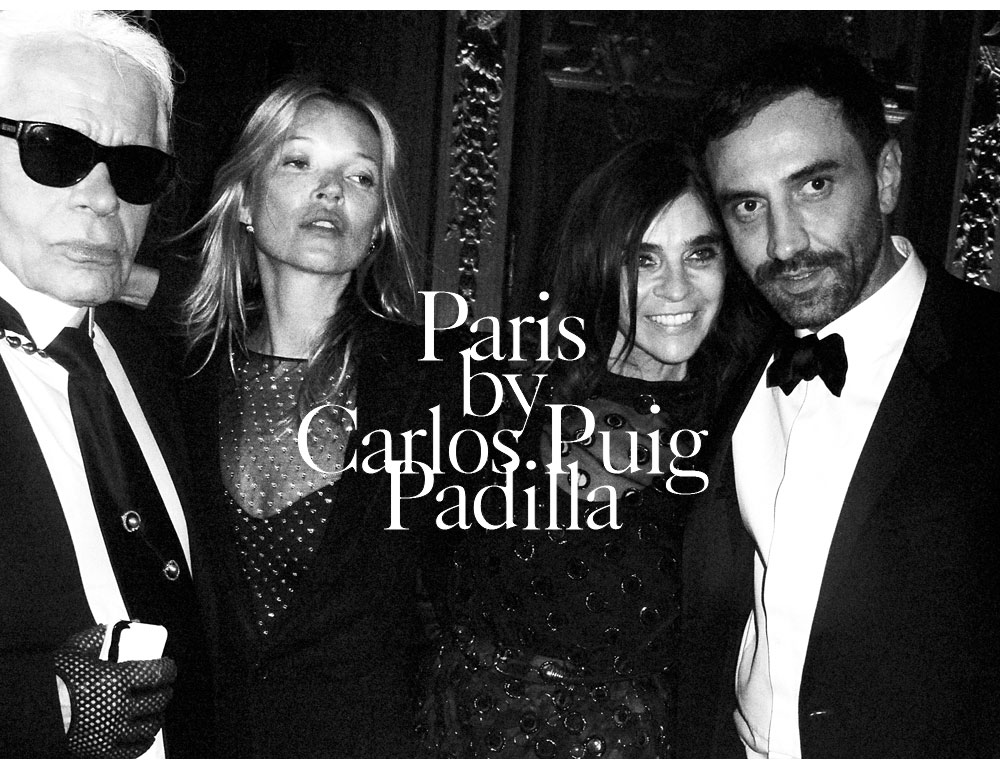 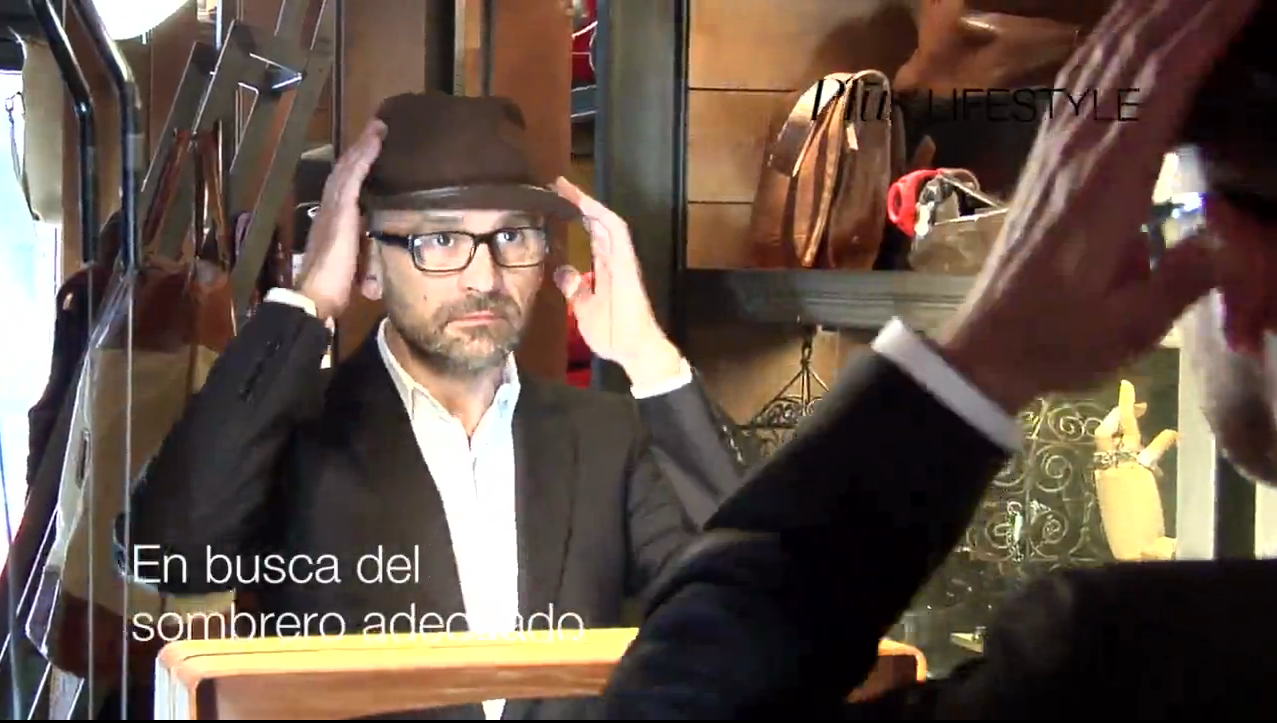 This time for Glamour TV, I was in Barcelona. It was day for shopping and paella. I start at The Outpost, the accessories reference shop of my friend Pep Esteve and I met Eva Vilallonga and thanks to her, I change my hat . Afterwards I walk to my friend Jean Pierre Bua‘s shop, the best fashion clothing place of the city. There I met my beloved friend Pilar Pasamontes and her fashion trendy dog Perla and Christian Santamaria trying a shirt . Afterwards, I went to Pinko and enjoy the company of my friend Ana Fernandez. At the end I met my girls at El Xiringuito del Escribà where my buddy Joan Escribà made one of the best paellas we’ve ever had beside Oriol Elcacho and Davinia Pelegri. A visit of trendy Barcelona fashion in the sun. Enjoy . 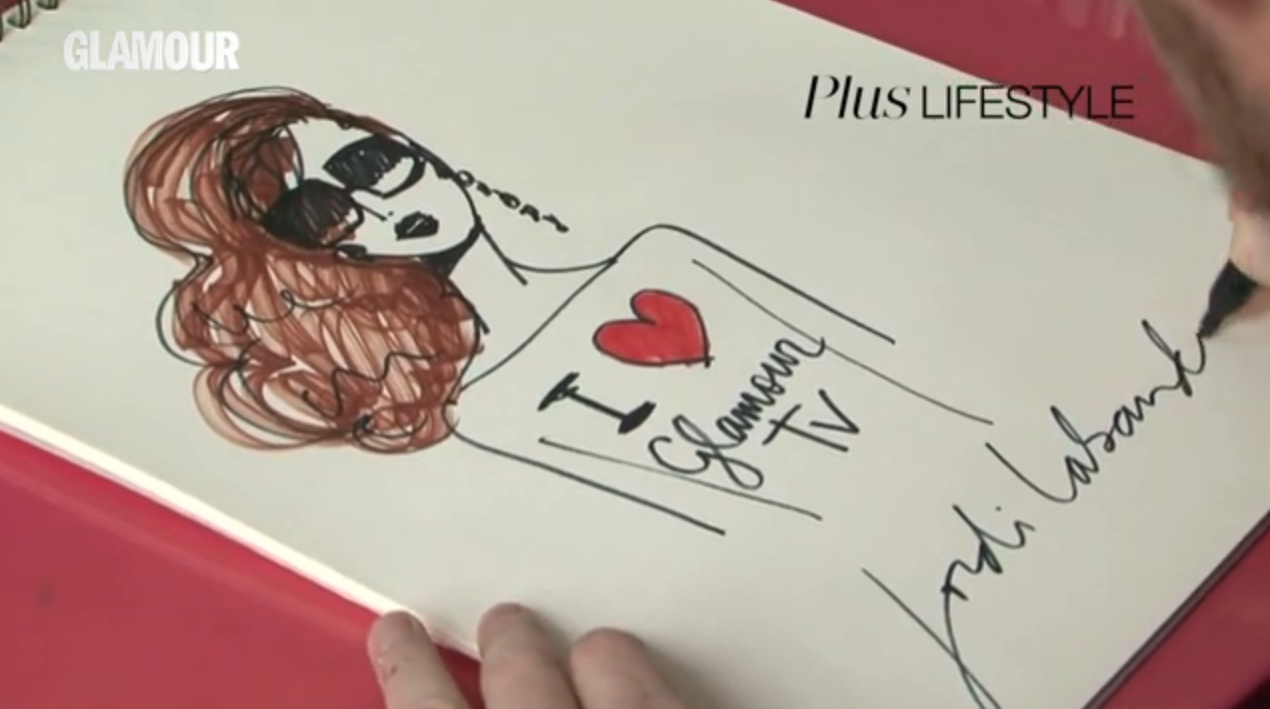 My friend Jordi Labanda is the best spanish illustrator we have in Spain. He works for Marie Claire, Wallpaper, the New York Times, Vogue Japan …. The list is huge. I went for Glamour TV to visit him in his Soho apartment . We had a walk in the area and discover his favorite shops. I know Jordi for years and I have the chance to share his talent and his friendship. For my program I had the privilege to share my admiration with all of you. He even did a scketch for our show. We love Jordi Labanda. I love Jordi Labanda. Thanks for all that talent my mate . 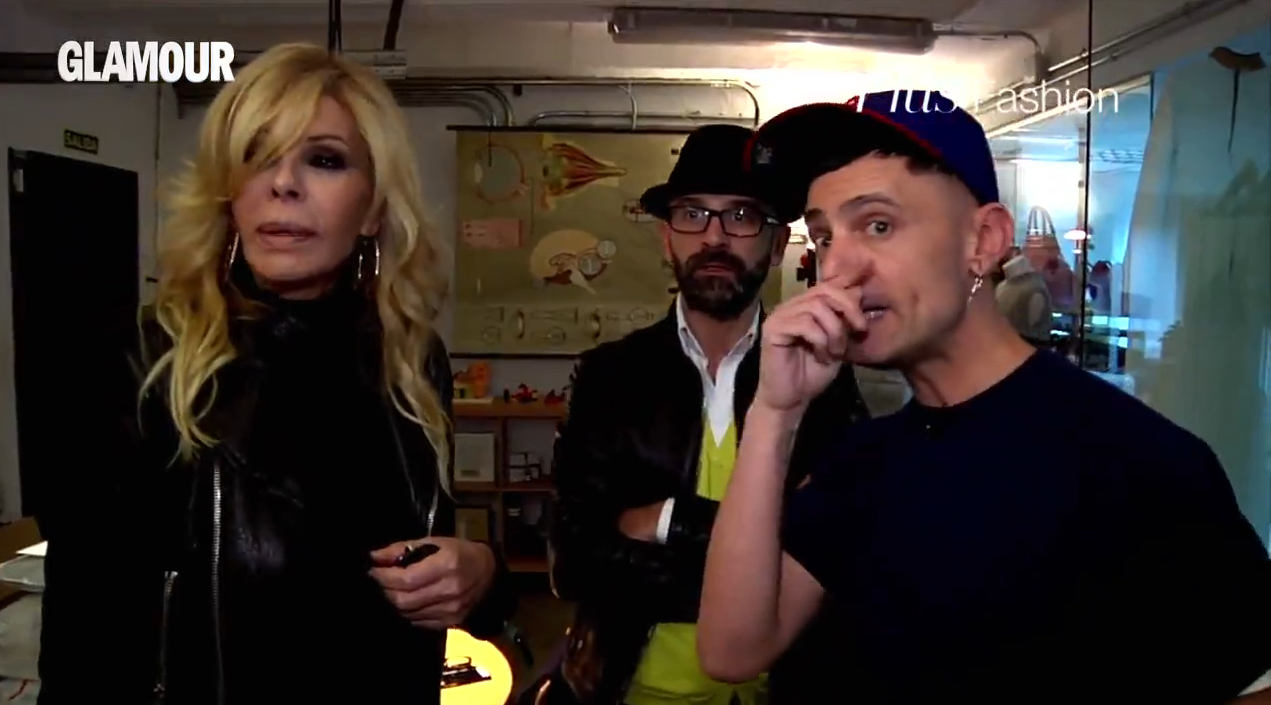 This week we introduce you David Delfin, one of the designers ( from the established ones ) most loved in Spain. His show is the most awaited every season during Madrid’s fashion week . The settings of his shows are original and full grace. This time, his idea, his therapy, was a lost. Alicia, his dog, died October 2012. This show was going and told how much David loved her dog and how much he miss her. Lewis Caroll and the poker cards, were there, too.

For Glamour TV, I had the chance to follow him during the fittings, to discover his mood board, visit him in his studio and being backstage . We speak with blogger Pelayo Diaz about his work with David and the fantastic bags he design for the show. Thanks to Glamour TV, you can discover how nice and talented David is. Have a look at the back & the front of the Spanish fashion scene. 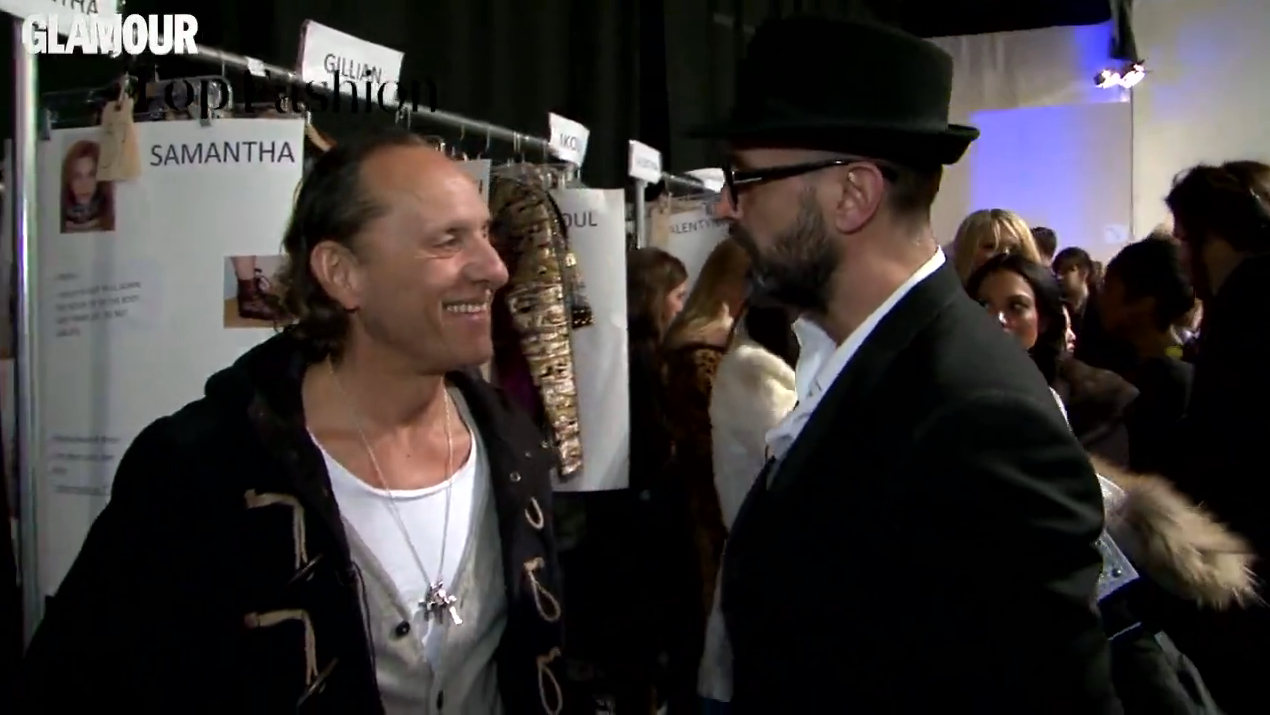 This time I travel to New York for the fashion week to cover Custo Barcelona show at the Lincoln center .

The collection was titled Beauty and the Beast. For women, Dalmau did tiny dresses with pronounced shoulders in a variety of sparkly, jangly fabrics and knits. For men, it was all about wildly printed suiting; woolly shawls were draped over the models’ shoulders.

Dalmau’s been showing since 1997 in New York. I had the chance for Glamour TV to get in the backstage, talk with the make-up artist and  interview Custo . Before the show I had a walk on Brooklyn bridge. It was very very cold & very fun trip. 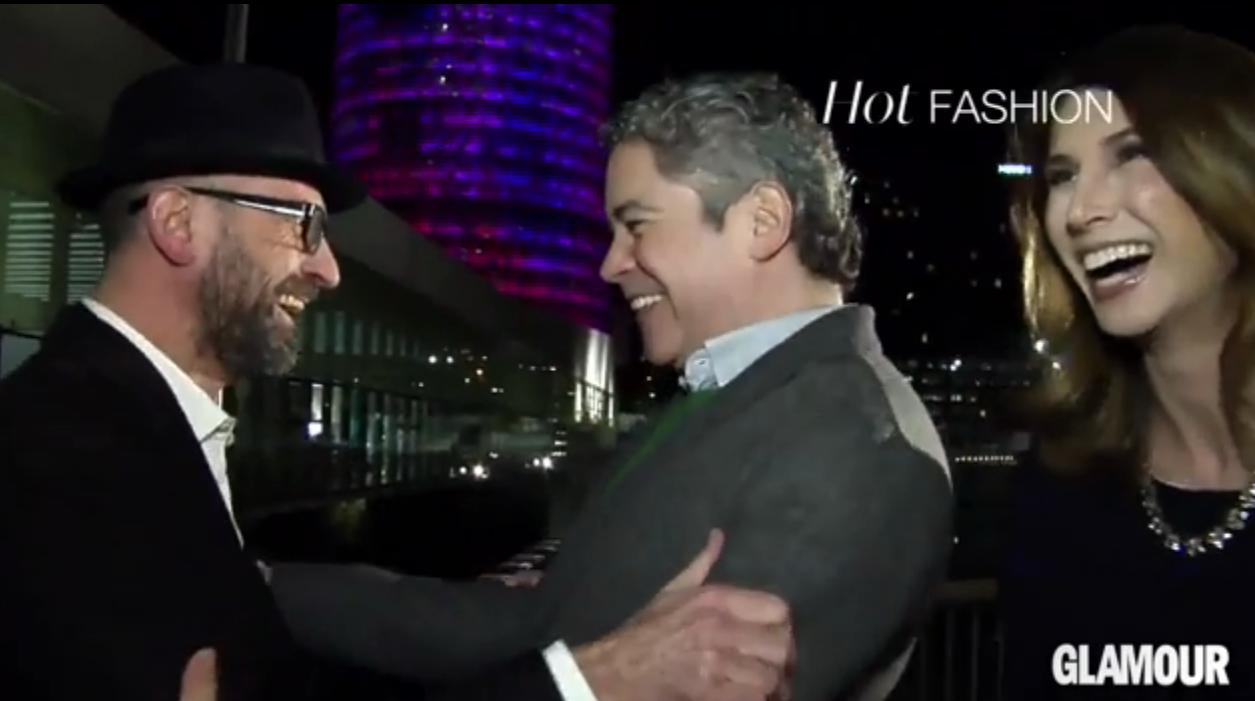 For Glamour TV, we covered the event from the beginning till the end . We went  backstage to discover the hair and make up for the show and we show how fun & alive can be in backstage .

Top model Clement Chebernaud shaving for the show, Jon Kortajarena and Antonio Navas presenting HE by Mango and the new star in the block : River Viiperi, a young model from Ibiza who is dating Paris Hilton. Paris was at the 080 Barcelona fashion following the steps of his new boyfriend.

This time the 080 Barcelona Fashion until february 1st was located on the new Disseny Hub Barcelona building. A fantastic location beside Plaça de les Glòries and nearby  Jean Nouvel’s Torre Agbar .

A very refreshing fashion show, with a great cocktail dinner party full of spanish celebrities.  Have a look and enjoy . 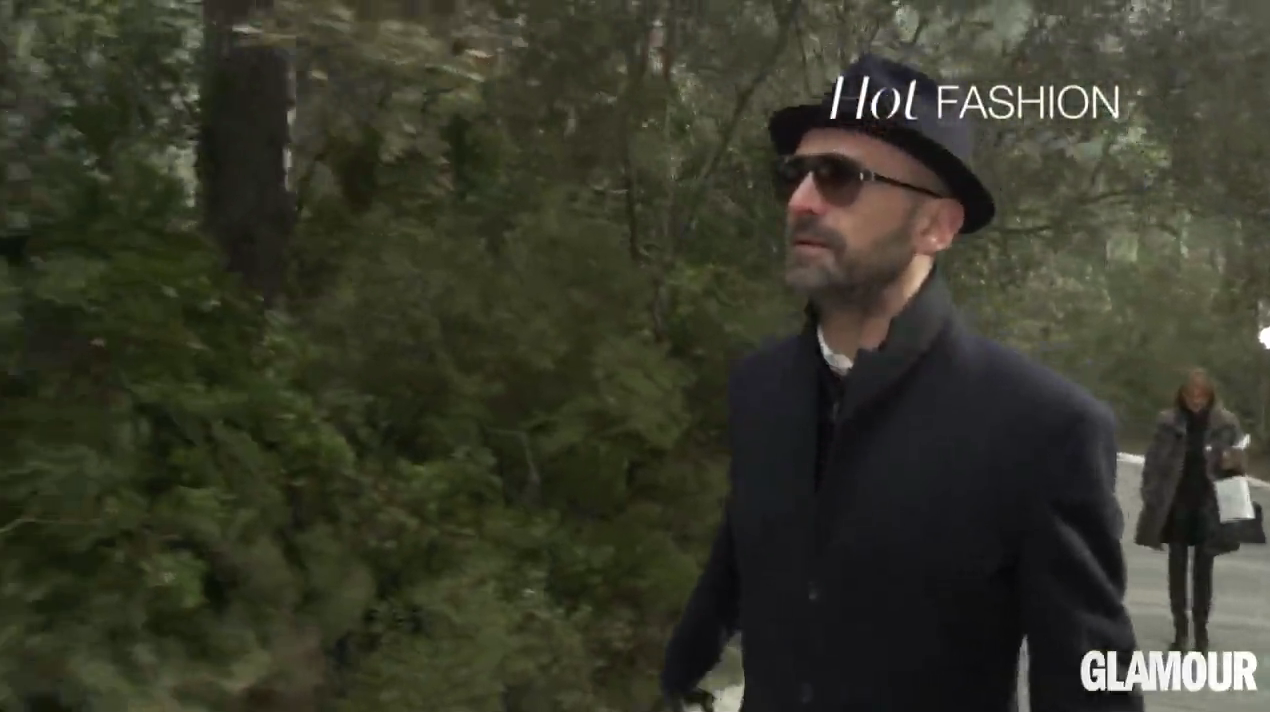 This time running around in a freezing Paris for the Haute Couture. The snow, the cold and the bad weather on these days, made difficult to walk and drive from one show to another.

It was fun but very cold .

Please, do follow the links on Chanel and Christian Dior if u want to see the full collection.

Best adresses in the Marais 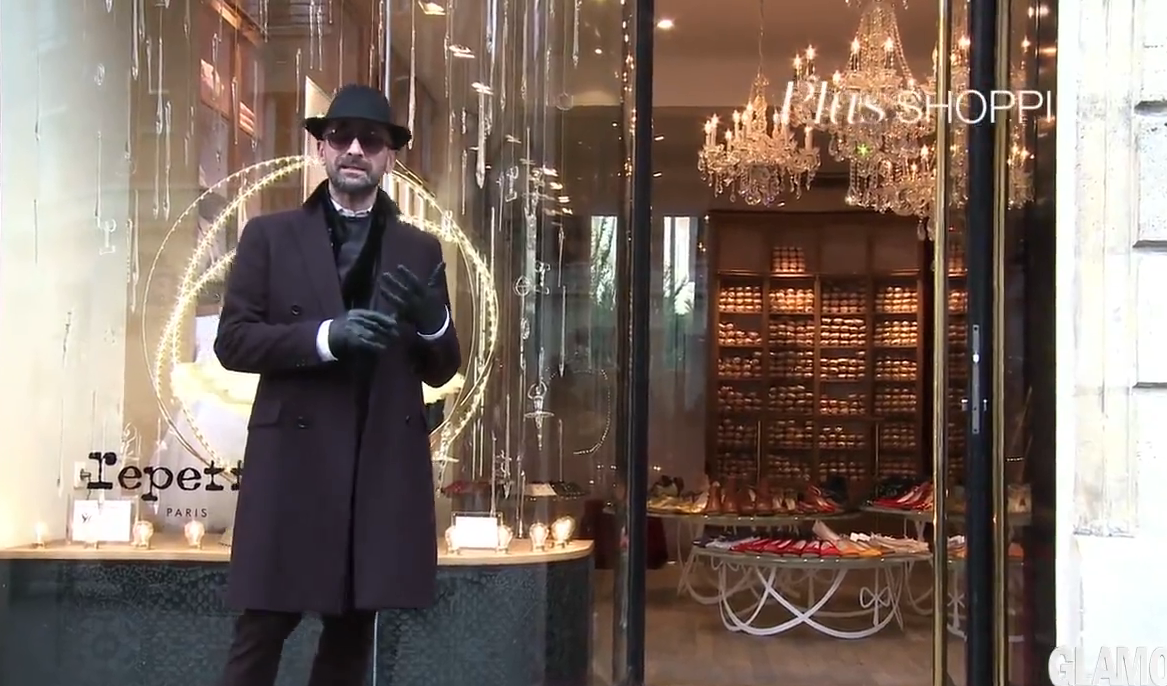 The Marais is ine of the most famous neighbourhood in Paris, because of the art galleries, cosy restaurants and fashion & food shops u can find all around .

These establishments are mainly concentrated in the southwestern portion of the Marais, many on or near the streets Sainte-Croix de la Bretonnerie , rue de Turenne, rue des Francs Bourgeois and rue des Archives.

Not very far from Place de la Bastille you can visit the Musée Picasso, the house of Nicolas Flamel, the Musés Cognacq, the Musée Carnavalet and bars like La Perle or the Salon de thé Carette in Place des Vosges.

For Glamour TV, I walked around the area showing one of the most famous places in the area to buy some tea, go shopping and eat a great falafel . Enjoy

Marie Christiane Marek and her Christmas Trees in Paris 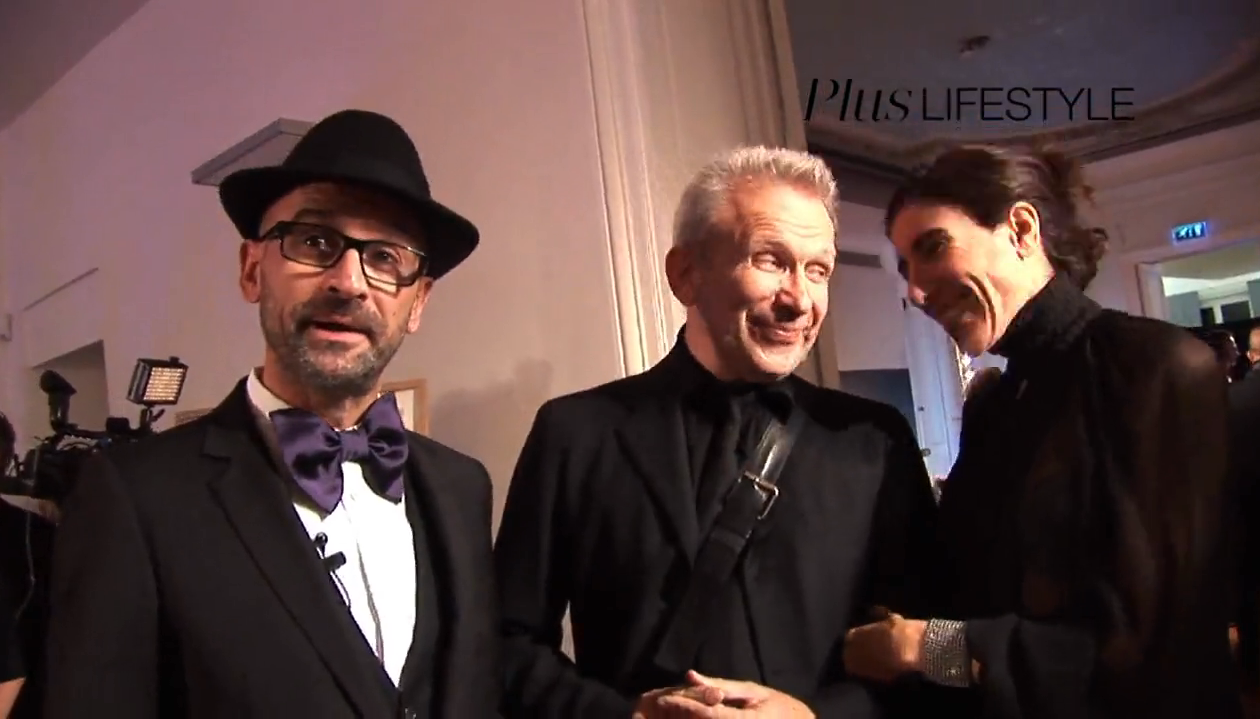 My friend Marie Christiane Marek is the woman behind 17 editions of “ Sapins de Noël ” which were put up for auction ( almost € 70,000 were raised ) and a Gala dinner at the Hotel Salomon de Rothschild in Paris. An event in favor to cancer for a charity thanks to the Christmas trees designed by the big names in fashion, beauty, design and architecture .

Jean Paul Gaultier tree was made of a stack of Coca-Cola tins, Chantal Thomass did a white-feathered creation, Lesage a black embroidered “plant” in homage( by Hugo Barriere ) to the late embroidery king François Lesage, Pierre Hermé’s tree was a multicolored macarons … We discover the Christmas ghost vision of Casper neon ( eternal return ) by Jean Charles de Castelbajac ( he has designed robes for Pope John Paul II, dressed stars such as Elton John, Sarah Jessica Parker and Lady Gaga ), Stella McCartney coloured neon tree, the fantastic SM cookies tree by Dean and Dan Caten for Dsquared and the metallic poles by Elie Saab. After filming this part for Glamour TV, I discover that a Christmas tree can be stylish thanks to the words of Suzy Menkes . Merry Christmas