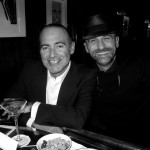 Pictures taken during the Fashion week in Paris. Models, journalists, music and drinks. Nighlife of fashion

It’s been almost a year since Carine Roitfeld stopped being Editor-in-Chief at Vogue Paris. One of the most powerful tastemakers in the industry, she still maintains status, although without a magazine in which to directly package her views. However she won´t stop dancing, with plenty to celebrate… I was at her book launch (Irreverent, Rizzoli, […]